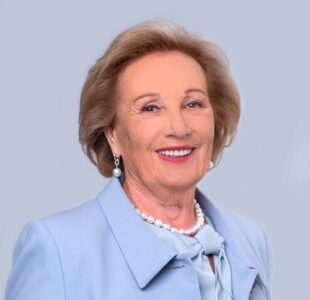 Chairwoman of the Supervisory board

Filya Zhebrovska was appointed the Chairwoman of the Supervisory Board in 2007.

She started her career in Farmak in 1980 as a Chief Accountant. In 1990 she was appointed Deputy Director for Economy and Finance — Chief Accountant, and one year later promoted to Chief Financial Officer. In 1995 Filya Zhebrovska became the Chairwoman of the Board and CEO of the Company.

Under her leadership, the Company was refocused from the production of active pharmaceutical ingredients to the manufacturing of finished products in compliance with international quality standards. In 2010 Farmak became the leader of the Ukrainian pharmaceutical industry due to the chosen business strategy, innovative technological platform, and investment in production and staff. The company has preserved its leadership position till the present day thanks to the high quality of the products and the introduction of innovations. Farmak is one of the largest exporters of pharmaceutical products in Ukraine. Today, the company is focused on increasing its footprint in European markets.

Filya Zhebrovska is the author of 120 scientific works (including one monograph) and 100 Ukrainian patents.

She was awarded honourary distinctions: the Order “For Merits”, the Honourary Certificate of the Cabinet of Ministers of Ukraine, the Medal “For Merits in Healthcare” from the Strazhesko Academy of Medical Sciences of Ukraine; Golden Mark of the Ukrainian Union of Industrialists and Entrepreneurs, diplomas of the Ministry of Healthcare and Kyiv City State Administration, and a number of other awards.