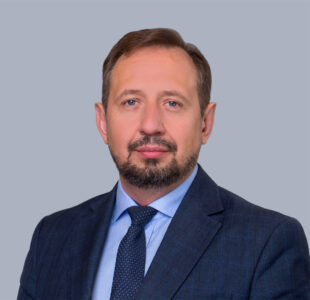 Dmytro Taranchuk became the Director of Legal Support of the Company in 2006. He started his career as a Legal Counsel in 2000.
Under the leadership of Dmytro Taranchuk work of the Legal Department has been organized, corporate restructuring processes and protection of the company’s intellectual property rights implemented. Also amendments to the current legislation of Ukraine were initiated and later successfully implemented, including the introduction of a zero rate of ethyl alcohol excise duty which is used for production of medicine.
Before Farmak Dmytro Taranchuk served as a Senior Legal Counsel for the State Taxation Service, later, as a Senior Legal Counsel for a commercial bank.