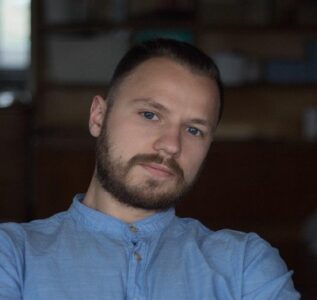 My name is Dmytro. I have been working for Farmak for over seven years. But let me tell you more about everything…

I am from Chernihiv, and my interest in natural sciences, including chemistry, started in school.

My older brother had a similar passion, so he was the first to enter Igor Sikorsky Kyiv Polytechnic Institute choosing industrial biotechnology as his major.

What my brother told me about his studies would pique my interest, so I soon realized that I wanted to get into biotechnology, too. As early as in the eleventh grade, I started thorough preparations for admission by attending the preparatory courses that Igor Sikorsky Kyiv Polytechnic Institute offered. I finished school with distinction in chemistry to become a biotechnology student in 2008. My professional experience started in the fifth year of my studies when I got my first job as a regulatory affairs specialist. The new position taught me the basics of registration. At first, it was interesting, but I gradually understood that I needed to grow and develop further.

I refreshed my CV on robota.ua portal and received a call from Farmak the same day. They invited me for an interview. Later, I got to work in the team responsible for CIS regulatory affairs. My responsibilities included drug authorization, authorization renewal, variations to dossiers of drug products. It was a completely different level of work: the Company had the processes set up, and one could feel teamwork and dedication to the common cause. At first, it was difficult for me, like it would probably be for anyone in a new place, but I eventually got understanding of all work processes and became a professional in my area.

After two years of successful work, I was offered a position at the department responsible for other markets as the Company was rapidly developing and needed a person to deal with regulatory affairs. To better understand all aspects of a new job, I attended a training and a seminar abroad where I learned about the regulatory requirements of other markets and had an opportunity to talk in person to leading experts from regulatory agencies. The Company has given me the opportunity to learn from the best of the best, and I am grateful to it for that.

After a while, I was offered a managerial position in market development, which I have been holding ever since. We cooperate with regulatory authorities, partners and support the authorization and authorization renewal processes.

I am also a change leader in ‘Farmak’s Corporate Culture Transformation’ project, which allows me to influence the changes in the Company and communicate them to the employees.

My job is my hobby.

I wish all young people not to back down from challenges, be brave and try new things!