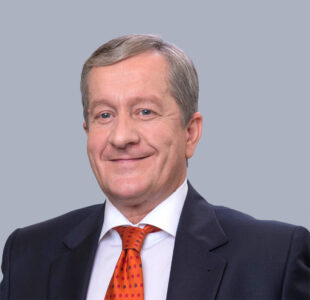 Mikhail Vanat is the Supervisory Board member since June 30, 2017, he was reelected in April 19, 2018. He manages the Development and Marketing Committee. He is a member of the Audit Committee of the Supervisory Board, as well as the Investment and Science Committee.
Mikhail Vanat joined the Farmak team in 2003. He started as the commercial director, then held the position of marketing and sales director.
Mikhail Vanat was responsible for building the company’s marketing policy and monitoring its implementation, analyzing the market environment and sales channels, forecasting consumer demand, developing product portfolios. Under the leadership of Mikhail Vanat, a successful marketing team was created, a marketing strategy developed and implemented that became one of the key factors of the company’s success, which has led to becoming the leader in the domestic pharmaceutical market since 2010.
Prior to joining Farmak, he was an executive director at Pharmacia-2000, he was teaching at the National Medical University of O. Bohomolets and practiced medicine for ten-years as a therapist.
He was awarded with a honorary certificate by the Ministry of Health of Ukraine and certificates from the Cabinet of Ministers of Ukraine.
He graduated from the Ternopil State Medical Institute (now Ternopil State Medical University), his specialty – therapist”.