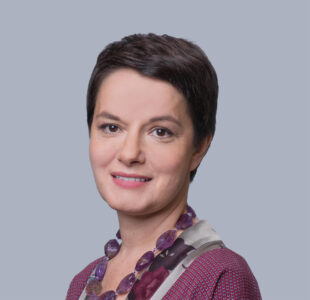 Victoria Smarodina holds the position of Chief Financial Officer since  2011. Before she was the Head of Internal Audit Department.
Under her leadership, the Company adopted unified financial accounting principles based on International Financial Reporting Standards (IFRS); also modern policies have been introduced in management accounting, budgeting and treasury management.
Victoria began her career in Ukraine International Airlines as an Economist. In three years she has been promoted to the position of Head of economical department. After she has 13 years of working experience in the Big Four (audit firms) such as Ernst & Young and Deloitte.
Since 2005 Victoria is a chartered certified accountant and a member of ACCA (Great Britain).
Victoria Smarodina graduated with honor from the Taras Shevchenko National University of Kyiv with a degree in Economic Cybernetics.